A Little Yellow Bird and a Great Big Thanksgiving 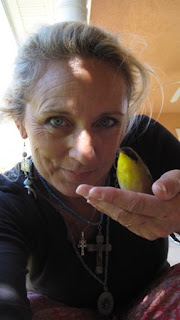 I got away to St. Augustine recently to paint for a few days. The weather was so wonderful that I had doors and windows open for all the fresh air and sunshine... and while standing in the kitchen I heard a thud against one window and before I could bolt out the door to see what it was, I heard a second thud against a second window. I stepped out the door just in time to see a little yellow bird floundering on the ground and gasping for air. I did not think I could take the poor thing dying while I watched, so I picked it up and actually began praying out loud for the little thing. I blew air toward its little beak that had been opening and closing, and it just sat there... so I blew more air. This went on, me praying and little bird trying to breathe for at least a minute, and then it occurred to me to take a picture... so I grabbed my camera and snapped a few shots, hoping for a happy ending... and then just as I finished the pictures, little yellow bird flew away to the bushes. This was the ending that I hoped for. How often does a bird hit the glass, not once, but twice and still fly away? I was very happy, and I would like to think, so was little yellow bird.
So today, I am giving God the thanks for the second chances that He graciously gives... Sometimes, even when we have run into the glass for the second time! I am grateful for my family, friends, being at home, God's amazing Word and His unfailing love.
Posted by Charlotte at 5:47 PM 1 comment: