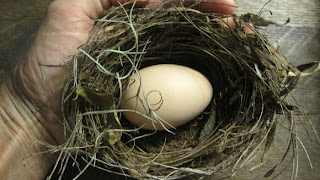 Yes, I am raising chickens. 46 of them to be exact. Started out with the little peeps when they were one day old this spring. Some of them came from a feed store; and some of them came through the mail. Yes, they send the little darlings in a cardboard box, if you can believe it. I'll post some pictures of my little nieces going with me to get them - It was hilarious!
And last night when I got home (late) David Paul said he had a surprise for me. He grabbed a flashlight and out to the chicken house we went. Inside everyone was on their roost - but lo and behold, an egg was in our newly strawed nesting box! I was thrilled. He had waited until I got home so that I could be the one to bring it in!

The egg is from the Buff Orpington Chickens (shown at left), which are the ones we got first. The Ameraucana Chickens will begin laying next; I got them a month or so later, and then I got another "batch" after that. It is kind of addicting... the little peeps are just darling! And if you get one, well you just want a hundred! But I showed a little restraint and we only have, like I said, 46.

They are sweet, actually, and are just a joy to have around... And the eggs are going to be great!
Posted by Charlotte at 8:01 PM